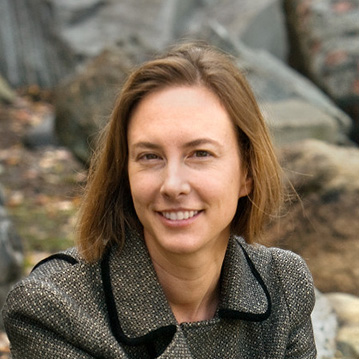 Rowena Lohman received her B.S. in geology in 1998, and her Ph.D. in geophysics in 2004, both from the California Institute of Technology. She followed her time at Caltech with postdoctoral positions at Woods Hole Oceanographic Institution (WHOI) and at the Jet Propulsion Laboratory (JPL) before joining the Cornell faculty in the summer of 2007. Lohman aims at advancing our understanding of the nucleation of earthquakes and their interactions within tectonically active regions that are often hosts to densely populated metropolitan areas. Her primary interests are earthquake physics, inverse theory, satellite remote sensing (particularlyInterferometric Synthetic Aperture Radar or InSAR), finite element modeling, ground displacements associated with a variety of human and natural causes (including subsidence in New Orleans and upstate New York), and the tectonics of southern California, Louisiana, the Cascadia subduction zone, and Iran. Increasingly, she is also interested in the effects of land use change (logging, mining, etc.) on observations of ground deformation and other remote sensing observations.

Lohman's specific research involves the use of satellite-based remote sensing observations of ground deformation before and during earthquakes. Her primary focus will be on identifying anomalous behavior along fault zones and ingesting these observations into models of the dynamics of earthquake nucleation and rupture by using geodetic observations of ground deformation, primarily InSAR. Much of her work will involve development of methods for fully capitalizing on the rapidly increasing volumes of imagery available from international satellite platforms.

Lohman's service activities on a national level have primarily involved community-led organizations aimed at improving access to satellite remote sensing data and numerical modeling tools, as well as involvement in the Southern California Earthquake Center, one of the key organizations for bringing scientists and engineers together to help identify and solve problems related to earthquake hazard around the world. She is also a member of the planning committee for the Southern California Earthquake Center (SCEC).