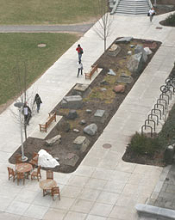 When Cornell's Department of Geological Sciences (now a part of Department of Earth and Atmospheric Sciences) moved in 1971 from McGraw Hall to Kimball Hall, several large rocks displayed in the spacious halls of McGraw Hall for their aesthetic beauty, as well as for class instruction, had to be relocated.  Placing the rocks outdoors where they would appear in a more natural setting and where passers-by could readily examine them became a popular idea.  Meyer (Mike) Bender '29, a long-time benefactor of the department, became interested in such a project.  He and his wife, Gertrude, provided the funds to build Rock Park East in honor of Mr. Bender's mother.

Rock Park East received considerable attention, not only from geology students, but also from others who were attracted by the unusual display for a variety of reasons, ranging from scientific to aesthetic. 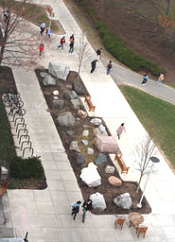 Responding to this high level of interest, Mike and Gertrude Bender generously offered to sponsor a second rock park to be placed west of the first display. Rock Park West required collecting additional large rocks.  It is no small task to find and acquire multi-ton rock samples from sites throughout New York State and surrounding areas, and transport them to Ithaca.  Fortunately, Ted Snedden '78 took over this task in the summer of 1977.  Through his energy and initiative, and through the cooperation of quarrying and construction companies and various personnel at Cornell and elsewhere, Rock Park West was completed by the fall of 1978.  In fact, during that period a number of new specimens were added to Rock Park East as well. 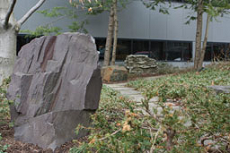 In 1984, when the Department again moved, this time to Snee Hall, (a building constructed specifically for the Department), it was decided that Rock Park East and Rock Park West would remain as they were and that a new rock park would be constructed for Snee Hall. Again, Gertrude and Meyer Bender '29, provided the funds to build the park in honor of Mrs. Bender's mother and father.  To help make this park possible, Professor William Bassett, Allan Gibbs, and Jim Hibbard selected the specimens.  In a one week, 1,700 mile trip, Tom Trencansky, Joe Weaver, and Steve Uzmann collected the twelve tons of rocks.  The dedication of the Snee Hall Rock Park took place on June 1, 1986. 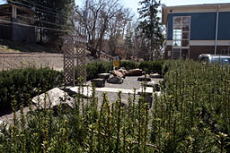 The fourth rock park is found on the grounds of the Jewish Living Center within the west campus residential units which is a few hundred yards west of Snee Hall.  This park was dedicated in memory of Meyer Bender 29'.  It was given by his wife Gertrude, his children Stephen Bender '58, and Alice Bender Klausner and families.