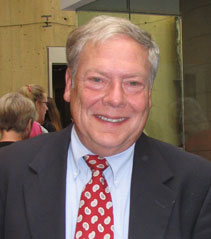 After receiving his B.A. in geology from the University of California, Berkeley, William White earned a Ph.D. in oceanography from the University of Rhode Island in 1977. White did postdoctoral work at the Carnegie Institution of Washington and at the U.S. Geological Survey in Denver between 1977 and 1980. From 1980 to 1985 he was a staff scientist at the Max Planck Institut für Chemie in Mainz, Germany, and then spent a year as associate professor in the College of Oceanography at Oregon State University. White joined the Cornell faculty in 1986. He spent seven months of 1995 as a visiting professor at the Ecole Normale Supérieur de Lyon and the Université de Rennes, served as a visiting professor at the Université de Brest in 2001-2002, and was a Merle Tuve Senior Fellow at Carnegie Institution of Washington in 2002. White is a fellow of the Geochemical Society and the American Geophysical Union. He served as founding editor of the electronic journal Geochemistry, Geophysics, Geosystems (G-cubed) from 1999 to 2005. He currently serves as chairman of the EarthChem Advisory Committee (EarthChem is an international geochemical database initiative).

White's primary research interest is the large-scale chemical evolution and dynamics of the Earth, particularly the origin of mantle plumes and the volcanoes they produced. The primary tools in this effort have been radiogenic isotopes (e.g.,87Sr, 206Pb) and trace element abundances in basalts, which are produced by partial melting of the mantle. Isotope ratios of radiogenic elements (e.g., the 87Sr/86Sr ratio) are of particular use because (1) isotope ratios of heavy elements are not chemically fractionated, hence a ratio such as 87Sr/86Sr in a basalt is the same as that in its mantle source; and (2) the abundance of radiogenic elements changes with time due to radioactive decay, thus isotope ratios provide critical evolutionary perspective on the Earth. His second interest is the chemical evolution of the oceans. Stable isotopes are useful in this area because they can provide information on paleotemperatures and the biogeochemical cycling of carbon and sulfur. This in turn relates to the abundance of atmospheric oxygen and carbon in the past. Studies that combine both table isotope and radiogenic isotope ratios represent perhaps the best hope for understanding the paleochemistry of the oceans, and indirectly, the long term controls on Earth's climate.

Geochemistry of the Solid Earth