Born in Pennsylvania in 1902, William E. Snee received both his B.S. and M.S. from Cornell. though both of his degrees were in the field of chemistry, Snee had a lifelong interest in geology. 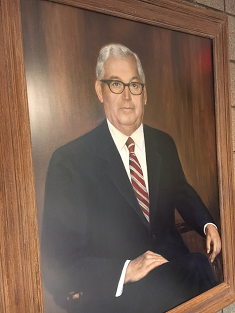 While working towards a bachelor of science degree in chemical engineering, he pursued this interest while taking classes and doing independent research in McGraw Hall's geology library. Snee continued his education at Cornell, earning a master's degree in industrial chemistry in 1926. His thesis examined the stimulation of oil wells by chemical means.

During his career in the oil industry, William Snee pursued successful new technologies and was well-respected by the business community. Though he was in the business of drilling oil, he had distaste for the negative effects on the environment and was interested in practices that would minimize the damage. Snee began to consider the potential for solar energy toward the end of his life.

After his death, William Snee left a large part of his estate to Cornell, and on October 8, 1984, following two years of construction, Snee Hall was completed as Cornell's home to Geological Sciences and was rightfully dedicated in honor of William and Katherine Snee.